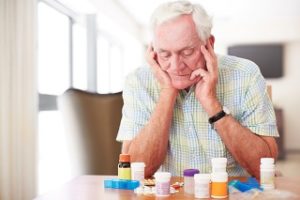 The paper “Patterns of medication prescription by dementia diagnosis in Australian nursing home residents: a cross-sectional study” published in the Journal of Pharmacy Practice and Research examines what medications are more likely to be prescribed to people with dementia.

“It is important to get an understanding of the types of medications people in residential aged care are prescribed and if this is different for people with dementia” said Dr Suzanne Dyer, from Flinders University’s Department of Rehabilitation, Aged and Extended Care and co-author of the paper.

Inappropriate prescribing can adversely affect a resident’s quality of life and has been associated with an increased risk of hospitalisation and mortality.”

The study was part of the CDPC funded project Investigating Services Provided in the Residential Environment (INSPIRED) involving 541 residents across 17 residential aged care organisations in Australia.

In house pharmacy data records, medication charts or pharmaceutical benefits scheme (PBS) data were obtained for each resident over a 12-month period. On average residents were prescribed 14.5 (±6.8) different medications with people with dementia prescribed three fewer medications compared to those without dementia.

Patterns in prescribing certain classes of medication was found to be different for people with dementia compared to those without. One quarter of the residents were prescribed the common antipsychotic drug risperidone, with people with dementia nine-fold more likely to receive it over a 12-month period.

“Even though the Clinical Practice Guidelines for Dementia recommend avoiding the use of the antipsychotics where possible, over prescribing of this class of drug in residential aged care is common,” said Dr Dyer.

In contrast, residents with dementia were less likely to be prescribed medications used for the management of cardiovascular and respiratory disease.

Evidence presented from this study provides an opportunity to increase awareness of the likely over prescribing of antipsychotics, and the potential under prescribing of medications for the management of cardiovascular and respiratory symptoms for those living with dementia in residential aged care.

Improving medication management in the aged care sector has the potential to improve both quality of life and care for those living with dementia.